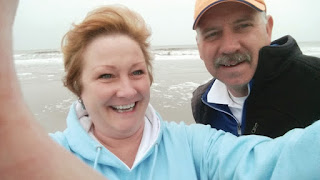 2014 was a rough year for Renee Bassett. She was diagnosed with breast cancer in 2008, and was treated with radiation and chemotherapy. At her check up five years out, at the end of 2013, her blood work revealed an elevated breast cancer marker.

In January 2014 Dr. Linda Reis, her Montana Cancer Specialist doctor, ordered a bone scan and a test for the BRCA genes. The good news was that no cancer was found in her bones, but she did have the BRCA1 gene.

Back in 2008 she was not tested for the BRCA genes. Research information on the genes was new and the test was very expensive -- $4,000.

Renee had seven surgeries last year, the first two were  to prevent the possibility of cancer. Her first in mid February was an oophorectomy, a removal of both ovaries. The second was a two-part bilateral mastectomy taking both breasts.

Renee struggled with the decision to have breast reconstruction. One son helped her make a decision to proceed with reconstruction. The breast tissue of the radiated breast did not heal as well as the normal tissue. Not only was the tissue radiated but because she was a young breast cancer patient, age 47, she was given a stronger dose of radiation which caused the breast tissue to atrophy and reduce circulation.

As a former ER Tech, Renee realized when her re-constructed radiated breast was infected. She had several surgeries on the reconstructed breast. She praises her Missoula surgeon who followed her closely, often making special trips to Polson. She spent three months in a recliner. Renee works at Salon Envy and did make an appearance at work periodically last year. She started back full-time in January 2015.

Today Renee has healed, is almost back to full arm movement, and loves being back at work. She especially feels good  that her sister is safe and that her relatives are aware and in control of their possible risk of cancer. She notes that the genetic test for the BRCA genes  is expensive but if the same company screens other family members, and as long as the defective gene is identified, the cost is around $500 for each person and most insurance companies will at least pay a portion.

“We hope technology gets less expensive and research may come up with a fix for the gene,” she says. “My grandchildren are not at an age that we need to rush this. We feel empowered by the information.”

To make an appointment with Rene call Cheerful Heart at 883-3070.

Posted by cheerfulheart.org at 6:23 AM

Questions about CH News or promotions? Email cheerfulheart@centurytel.net
WE ARE ON FACEBOOK!
CHECK IT OUT AND LIKE US!

cheerfulheart.org
Polson, Montana, United States
Cheerful Hearts mission is to provide free non-medical services for Lake County cancer patients. Anyone who needs a service or would like to be part of this giving organization can call the message line 883-3070.